This is a great summer salad for those drool-worthy heirloom tomatoes. The pesto recipe can be used with the burrata and heirloom tomatoes OR use it wherever you like to use pesto – minestrone, salad dressing, on hard-boiled eggs, etc.

cleaneatingwithkatie
This recipe takes pesto to the next level – and no one will know that it has kale in it!
Print Recipe Pin Recipe
Prep Time 15 mins
Course Appetizer, Salad
Cuisine Italian
Servings 4 people

For me, Brussel sprouts are literally THE most exciting seasonal vegetable in the fall and winter (well, tied for first with butternut squash). I remember the first time I had Brussels sprouts was in 2009. It was part of a veggie medley at a wedding and it was a WHOLE Brussel sprout. It was terrible. Who cooks them whole? About a year and a half later, I bought them at the farmers market and found a recipe that called for them to be halved and roasted with butter and bacon. Much better. Over the years I have tried many recipes and pretty much try to eat them as much as possible in the fall and winter. Here is current favorite Brussels Sprouts recipe.

I’m convinced that there are two keys to Brussels Sprouts, 1) bacon (I’m sorry if you don’t eat bacon) and 2) thinly sliced or shaved. I can handle quartered, but not even halved. They are so densely packed, THIS is the key to loving them. I like using my food processor and using the slicer attachment.

cleaneatingwithkatie
This Brussels Sprouts Salad will be a crowd pleaser at your dinner table or at your next event — even if for Brussels Sprouts haters! The key is to thinly slice or grate them for even cooking, otherwise they are a mix of overdone and underdone. Blech.
Print Recipe Pin Recipe
Cook Time 30 mins
Course Salad, Side Dish
Cuisine American

Massaging Kale? Is she kidding? Nope, not kidding. Kale is a great veggie and is all the rage these days, BUT it can be hard for some to digest when eaten raw. It’s a very dense leafy green and massaging it can help break it down (aka pre-digestion) which makes it easier to digest. You can use about a tablespoon of olive oil and just get in there with your hands and massage away! 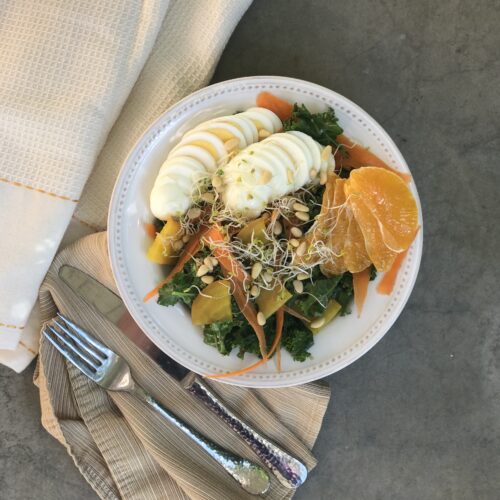 cleaneatingwithkatie
Kale is all the rage these days but for some people, when eaten raw it can cause digestive distress. When massaged with some extra virgin olive oil, it can help to make the kale more digestible. This salad is a like a taste of spring in every bite because combines many spring veggies.
Print Recipe Pin Recipe
Prep Time 15 mins
Course Main Course, Salad
Cuisine American
Servings 4 people