Welcome to my site! Here’s a little (well maybe a lot) about me.

I was born and raised in the south San Francisco Bay Area and I’ve lived here my whole life. I’m very much a California girl. I’m married to the coolest person – Jim Leadbetter. He pretty much rocks. We have two dogs, Kora, a pitbull mix, and Molly, a pitbull mix. Dogs are pretty much the most amazing creatures on this planet and I couldn’t live without them. I’m currently a teacher. I’ve taught first grade for four years and fifth grade for four years. I recently accepted a position in my school district to be a TOSA (Teacher on Special Assignment). Basically I’ll be teaching teachers (TK-5) in my district and helping them to feel prepared and equipped to teach the new CCSS Math, while using our new math curriculum.

While I have a passion for teaching public education, in the past several years, I knew that I wanted something more. That’s when I decided to go back to school to become a Holistic Nutrition Consultant. I finished the Nutrition Consultant program through Bauman College in April of 2016. But let me back up just a little and explain how I became interested in nutrition in the first place.

In my junior year of high school, for my anatomy and physiology class, we went to the morgue. And while it was a cool experience, I left thinking, “those human muscles, look a whole lot like the meat I’m eating”. For the next eight years, I was a lacto-ovo-pesco vegetarian. Mind you, I was a carb-aholic vegetarian. This was not the healthiest time of my life. I’m not saying that there aren’t healthy vegetarians out there, but I wouldn’t place myself among them. I really didn’t miss meat much at all. I even worked at Outback Steakhouse for one year during my years as a vegetarian.

Around year seven of vegetarianism, I started craving of all things, pepperoni. In my head, I thought, “what?!?! is going on!! I didn’t really even like pepperoni pizza before becoming a vegetarian. It took me a full year before telling anyone that I was craving pepperoni (I was one of those sorta preachy vegetarians, you know, animal cruelty, CAFOs, etc.). My then boyfriend, Jim, and I were on a date at a swanky pizza place and he had pepperoni pizza. I told him, “I really want some pepperoni”. He was shocked and tried to convince me otherwise saying things like, “You won’t be able to wear you vegetarian t-shirts anymore!” But in the end I caved and had a half a slice of pepperoni. I can only describe the experience as the heavens above opening up and raining down delicious pork upon my tastebuds [insert inappropriate joke here]. I keep saying things like, “it’s so delicious and so spicy!”. There was no turning back for me. My friend Travis calls pepperoni my gateway meat. He is totally correct.

After that, it was slow going back into the meat world, but I embraced it fully and so did my friends and family. During my best friend Sarah’s, bachelorette party weekend in Napa, we went to Whole Foods to buy a wonderful assortment of beef jerky because that was the other meat I had been craving since reentering the meat eating world. Friends even called me their “meat-eating vegetarian friend”. HA!

While I was a vegetarian I read a lot of books on food production in this country. Some of my favorites include: The Omnivore’s Dilemma (I LOVE Michael Pollan and I often call him my Food Guru; AND this book was one of the other reasons I decided to eat meat again), Fast Food Nation, The Dirty Life, and Tomatoland. I started to realize that I really do have a passion and love for food.

Also, shortly after I began eating meat, I took a weekend summer job working for a friend’s farm. Tomatero Organic Farm (based out of Watsonville, CA) needed part time help at the local farmers markets, so I thought I’d give it a try. When I first started working, I felt sort of useless. I didn’t know much about the stuff we sold: three types of kale, rainbow chard, fava beans, dandelion greens, beets, and three varieties of strawberries (who even knew there were three varieties of strawberries – not ME!). But after a few weeks, I got better at identifying the subtle differences between the berries and I began trying to sauté the greens or make kale chips or roast the beets. I LOVED talking about the nutritional benefits of certain foods and giving new recipe ideas out and also getting new recipes from customers.

Then, my husband re 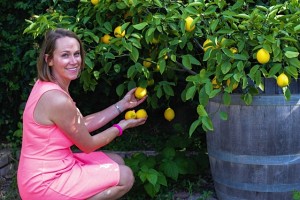 ad The 4-Hour Body by Tim Ferris. He started eating slow-carb, high protein, and veggie six days per week, with one “cheat day”. I was very resistant at first. I tried and failed at least twice before sticking with it. Once I stuck with it, I noticed weight loss, improved energy, and less sluggishness in the afternoons. But here was the big revelation: when I ate wheat on my cheat day (i.e. toast) I would get MAD heartburn and acid reflux. I had been experiencing acid reflux and heartburn since high school (notably when I ate muffins and pizza). I finally put all the pieces of the puzzle together: I had a gluten sensitivity. I went gluten free in July of 2012 and never turned back. I currently eat an 80/20 paleo diet (80% of the time “strict” paleo, ~20% cheat meals).

I started at Bauman in March of 2014. At the age of 31, in June 2014, I was diagnosed with Stage 2b Breast Cancer (DCIS – Ductal Carcinoma In Situ and IDC- Invasive Ductal Carcinoma). I underwent 6 rounds of chemo, bilateral mastectomy with immediate reconstruction, and 25 sessions of radiation. I also learned that I have the BRCA 1 mutation. I had my expanders traded out for “real” implants in 2015 and then again for bigger implant in 2016. Before the age of 40, I will have an oophorectomy (ovaries and fallopian tubes removed). Since my diagnosis, my nutritional focus has changed from eating well to look and feel well, to a focus on eating for survivorship, including eliminating toxins and preventing a recurrence. You can read more about my journey with breast cancer on my #teamklb blog.

Thanks for taking the time to learn about me, I would love to learn more about you. Let’s connect!