The 52 New Foods Challenge Food of the Week: Leeks

I’ve used leeks before in Potato Leek Soup (YUM!!) and instead of onions in a recipe, but I’ve never cooked them on their own before. Jennifer Tyler Lee has a recipe for “roasted leeks” and I made them and they were delish! I did use bacon grease instead of EVOO, which might have helped with the YUM factor. 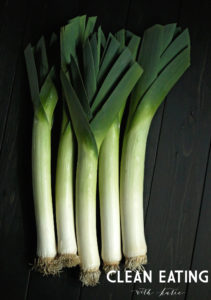 From Eating on the Wild Side: The Missing Link to Optimum Health

by Jo Robinson, The 52 New Foods Challenge: A Family Cooking Adventure for Each Week of the Year, with 150 Recipes

by Jennifer Tyler Lee, and Superfoods: The Healthiest Foods on the Planet