I have enjoyed chia seed pudding since I first discovered it in 2012-ish. When I was attending Bauman College (in-person, before I switched to virtual during Cancer treatment) we were required to do a food demonstration. Basically we had to make a snack and be prepared to present to the class. I made this recipe for my snack demo in April of 2014 :). 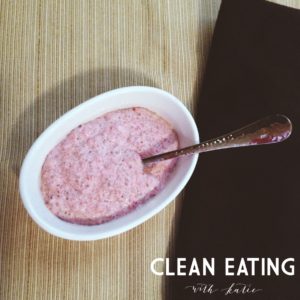 Chia seeds are those same seeds that are used in the popular Chia pets. They come from the plant Salvia Hispanica that grows in the deserts of Mexico. They help to reduce food cravings, reduce blood pressure, control blood sugar, and they are easier to digest than flax. Chia seeds should be soaked in water before using, creating a chia gel, which helps to hydrate the body. Chia seeds are rich in Omega-6 and Omega-3 fatty acids. They are also a good source of antioxidants, potassium, calcium, iron, dietary fiber, and they have some protein too!

Strawberries are the most popular berries in the world and are native to many parts of the world. Strawberries are rich sources of vitamins C, K, B6, and B1, silicon, fiber, flavonoids, manganese, pantothenic acid, iodine, folic acid, and biotin. Their flavonoid content helps to protect against inflammation, cancer, and heart disease. When storing berries, do not wash them until you plan on eating them because berries start to breakdown when they are moist. Strawberries are consistently on the Environmental Working Group’s Dirty Dozen list, so it is very important to buy organic strawberries.

Honey is one of the four items that bees produce. Honey is rich in riboflavin, iron, manganese, and vitamin B6. It is also rich in antioxidants and it is an antiseptic. Local honeys are also said to help with seasonal allergies.

Gluten is one of the proteins found in several grains including wheat, barley, rye, bulgar, sometimes oats, and possibly spelt and kamut. There are several problems when it comes to digesting this protein. First, gluten is an inflammatory that damages internal organs and tissues. When a pe

rson’s body has a negative reaction to a food, the body sends out inflammatory molecules, cytokines, to identify the food as an enemy. The immune system continues to attack the enemy, which can cause damage in the digestive system. These cytokines also cause a great deal of damage in the brain (Perlmutter, 2013).

Furthermore, gluten is one of the few foods that can cross the blood-brain barrier. This barrier exists to protect your brain from things that are foreign. Because it can cross the blood-brain barrier, it can have a negative effect on brain function. Dr. William Davis (2009) examines studies that have shown ingesting wheat has been associated with worse symptoms with those diagnosed with ADHD, schizophrenia, and the autism spectrum.

Furthermore, the wheat that we consume today is not genetically or physiologically similar to the wheat of decades ago. The first cultivated wheat, einkorn, has only 14 chromosomes and produces a less stretchy and stickier dough that rises very little (Davis, 2011; Pollan, 2013). It also has a less appealing flavor than the current wheat strains. Current wheat strains, triticum, are genetically very different, having 42 chromosomes, and it produces a much higher yield

Additionally, wheat causes an exorphin release (similar to endorphins, but originating from a source outside of your body) in your brain, making your body crave it the more you eat it. Digestion of wheat “…yields morphine-like compounds that bind to your brain’s opiate receptors. It induces a form of reward, a mild euphoria” (Davis, p. 50, 2009). This creates an ongoing cycle of eating wheat and craving wheat that can be hard to break.

Lastly, gluten is so prevalent in foods today that many people consume wheat without even realizing it. Besides the obvious breads, cereals, pastas, cookies, and cakes, gluten is also found in soy sauce, salad dressings, spice packets, cheeses, gravies, sauces, French fries, prescription medications, cosmetics and so much more (Perlmutter, 2013). It also has many aliases as well, including names like modified food starch, hydrolyzed vegetable protein, seitan, and textured vegetable protein, which are misleading and may be challenging to identify as wheat (Davis, 2009).

There is a wealth of evidence showing that gluten has many adverse effects on our health, you’ll have to decide for yourself, is gluten free for you?

Get off Gluten blog (2014, April) Flowchart of wheat retrieved from http://getoffgluten.blogspot.com/